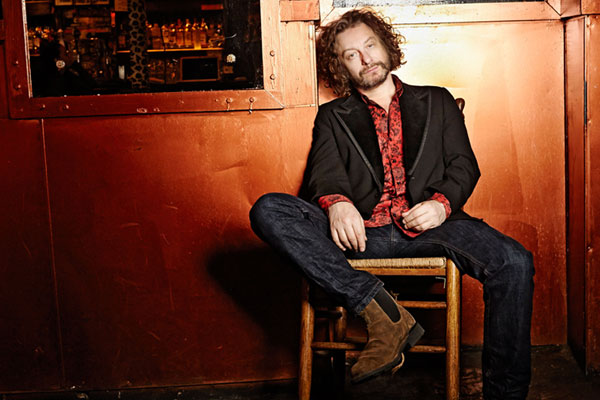 The best singer-songwriters serve the song. The songwriter’s songwriter, James Maddock, who has earned the respect of masterful writers such as Bruce Springsteen and Willie Nile, has built his acclaimed legacy on humbly honoring purity of expression. Many albums in his beloved catalog are elegantly spare, conveying his songs and sentiments in the most direct possible way. But for his latest album, The Green, the songs guided him into recording the most eclectic, exhilaratingly soulful, and imaginatively produced album in his career.

“This is my best album. It’s an upbeat record with really strong songs and a lot of surprises,” the British transplant reveals. “It all happened really naturally. I just listened to where the songs where going and allowed myself the time to give each one a proper sonic home.”

Since 1999, James Maddock’s boldly vulnerable songwriting, honeyed rasp, and distinct folk and Americana aesthetic have garnered acclaim from icons, peers, and tastemaking outlets like NPR, American Songwriter, Relix Magazine, and CMT Edge. Relix notes: “James Maddock possesses the kind of lived-in, craggy voice that would sound authoritative if he were singing the sports pages. Fortunately, he doesn’t need to do that because his compositional skills are a match for his delivery.” His consistency as a recording artist and a captivating live performer have attracted a devoted fanbase engaged and generous enough to fan fund the last two entries in his six-album oeuvre. He’s performed with Bruce Springsteen, Willie Nile, Aaron Comess (Spin Doctors) and David Immergluck (Counting Crows), sang on an album with Susan McKeown, and has built a respected international profile through tireless touring from the Northeast US to Europe to Australia.

Previous to his solo career, James was the frontman for the Columbia Records band Wood. It was in this context that he was first introduced to a mainstream audience when songs from the group’s debut, Songs From Stamford Hill, were prominently featured in Dawson’s Creek. In 2003, Maddock relocated from England to New York, and, soon after, launched his solo career. His 2009 solo album Sunrise On Avenue C won a New York Music Award for “Best Americana Album,” while its follow-up, Wake Up And Dream, ranked among the top albums of 2011 in WFUV’s (NYC) Listener Poll.

The Green truly captures NPR’s accolade that “his timeless songwriting style, which seems to draw from great songwriters of every era, conveys quiet confidence and lovely intimacy.”

The album is bookended by “Once There Was A Boy Part 1” and “Once There Was A Boy Part 2.” Version one has a gospel-folk gait recalling Van Morrison and the more pastoral moments of The Pogues, and version two is a fresh rendition with stately strings and dreamy vocals. The track “Speaking For The Man” recalls the silken soul of Jimmy Ruffin (“What Becomes of the Brokenhearted”). The title track finds James revisiting the political commentary songwriting style of his formative days. And the sleek and euphoric “Driving Around With the Win” and the simmering sensuality of “Let’s Get Out Of Here” are revelations in James’s catalog, showcasing the gorgeous patina of James’s vocals within an ultra modern sophisticated pop context.

This summer Maddock will be taking entries from The Green, as well as fan favorites from his back catalog, on the road. Live, Maddock imaginatively reinterprets his oeuvre to keep it fresh for him and his audience. “I love how songs reveal themselves differently in the live setting,” James says. “I’m grateful I have such a large body of work and an audience to share a creative dialogue with. It’s all a luxury and just a really beautiful thing—I feel very lucky.”

Tickets are sold out.

PayPal will redirect you back after successful payment. Please print ticket and present at door. If ordering tickets on your mobile device, present your email receipt at the door. Thank you!